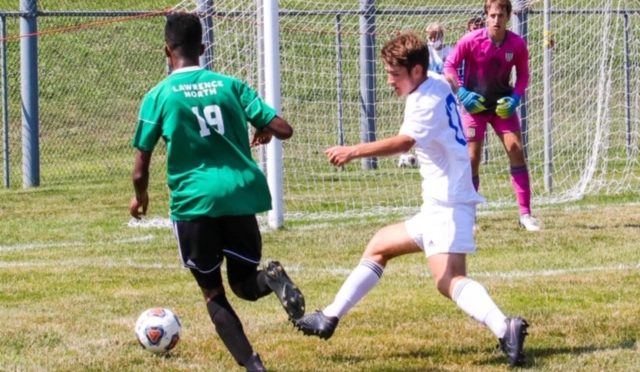 The boys varsity soccer team, four-peat sectional champs, have gotten off to a bit of a slower start this season with two wins, four losses and two ties so far. This season they are facing tougher teams such as the Lawrence North Bobcats, and the team did not get to have the club soccer experience in the off-season like they usually do due to the pandemic.

Despite a few struggles, they are seeing some success in leadership and growth. Assistant Coach Micah Gerike said, “The biggest thing that has led to the soccer team’s success is that the players have bought into the program. They listen to the coaching staff and believe in the information that they are being coached.” Gerike said, “We have had several players step up to fill roles of last year’s seniors. Many of these players have not had much experience at the varsity level, but they are able to still have the support from the other players.”

John Halvorsen, 11, number 15 on the team who plays center midfielder on the team, had several things that he enjoys about the soccer season. He said, “I would say the bond between my teammates that I have is my favorite thing. It brings a certain level of security knowing that I have brothers next to me at all times.” Soccer is often like a family for the coaches and players. Gerike said, “I think that the biggest strength is the “family” mentality. Everyone on the team and in our program is treated as a family member. Family members don’t always get along with each other, but they will always be there for each other when needed. A needed improvement in my opinion is that they need to make this season their own and not try to compare it to previous seasons.”

Hunter Stine, 10,  number 17 on the team who plays center back on the team, said there are many benefits to being on the soccer team. Soccer also has a main benefit. Halvorsen said, “The main advantage of playing soccer is just being in shape. It’s really good for your physical health and I think that is a big role in feeling good about yourself.”

Coaching has some advantages to it. Gerike said, “Networking. Because of coaching soccer: I got my teaching job, I have met friends, I have traveled the country and I have met professional athletes.”

Playing soccer also has many challenges at times. Halvorsen said, “I would say the biggest challenge is playing through adversity, meaning a team could be better than us or the refs just are not the best refs out there. You have to have a strong mindset to be able to do so.” Playing soccer has another challenge to it. Stine said, “Being in shape is one of the many challenges in soccer. In high school varsity matches, we play 40 minute halves. You are running up and down the field the entire time, so you have to be in very good shape. Another challenge is being able to keep your head up. Sometimes you could be getting beat 4-0, and you just have got to keep your head up and keep playing, no matter the score.”

Coaching soccer can also have obstacles to it. Gerike said, “One challenge I have as a coach/teacher is being able to draw the line between being in the classroom and being on the field. Another challenge that I think most coaches face is being able to keep a positive and energetic attitude at practice after a long day at work.”

Gerike said, “My favorite thing about coaching soccer is being able to share my knowledge and passion for soccer with others.” Stine’s least favorite thing about playing soccer is the constant risk of injury. But it doesn’t slow him down. Halvorsen said, “I focus on getting my mind set on the game and the game only. I listen to music and get pumped up to play. I make sure I am fully stretched out and loose so I know I’m ready to go.”

Stine said, “I usually focus my mind and listen to some music, and just think of game-like situations in my head to prepare. I also try to keep myself calm because if I’m nervous I make mistakes.”

Gerike and the other coaches let the players set individual and team goals they would like to achieve. His goal for this season is to have players step up and take vacant roles on their own.

Gerike said, “I enjoy watching players develop over time and seeing how their thought  process evolves with their style of play. I also miss playing soccer and for me coaching is the next best way to stay involved.” Gerike said, “My least favorite thing about coaching soccer is handling the paperwork and the more organizational tasks that are required.”

Stine summed up what makes all the challenges and ups and downs worth it.  “When I play, I forget about all my problems and hardships of the day. It’s my stress reliever.”