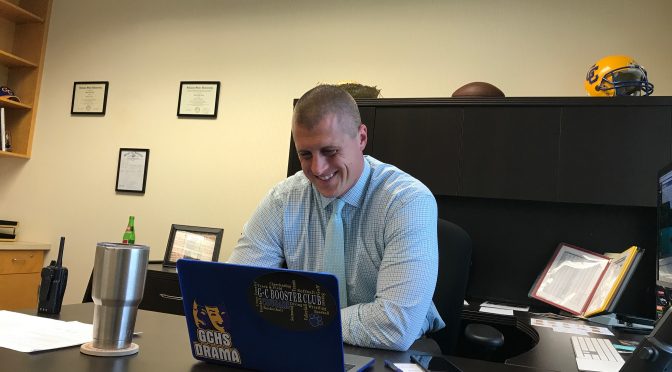 Photo courtesy of Connie Entrekin: Principal Jason Cary works in his office in his first year at GC.

“They didn’t hire Steve Bryant Jr., they hired you.” This was a piece of advice given to our new principal from our previous principal, Steve Bryant. Principal Jason Cary has had a smooth transition into our new school.

At first Cary was worried that not everyone would get his personality. “ I like to laugh and have a good time.”

Mr. Tim Horsman, counseling department, said he likes Cary’s funny side.  “He’s always making a joke, which is great because I function that way too. It’s not fun to work with someone who is always serious. His Twitter is almost always funny, too and I think it’s a great way to communicate with the students especially.”

Mrs. Connie Entrekin, administrative secretary for Mr. Cary, has also noticed his light-hearted side. “Yes, he does funny things…stay tuned…you never know what to expect.”

Aubree Cole, president of student council, explained, “I really like Mr. Cary’s Twitter. Not only is it very informative, but it also gives me a good laugh sometimes.”

Cary said he doesn’t expect very many changes. “If we get any input from the students or staff then we may look at things and ask how we can make this better.”

Entrekin said, “He is always positive and wanting to make GCHS the best school we can be.” However, Principal Cary does have one major goal for GCHS. “My big goal is getting our graduation rate higher,” Cary said.  “If kids leave here with a diploma, they leave here with an opportunity.”

This is his big goal and is hoping to get the graduation rate from 91% to 95%. After that he said, “Then we can move onto something else.”

Before his year started here he hoped to go to sporting events. He has definitely fulfilled that hope. He has been to “almost every sport more than once. It’s been nice seeing the kids and hanging out,” Cary said. The most exciting game he’s been to was the volleyball game against West Point. “That was a really competitive game and I got to ring the siren at the end, so I may be a bit biased on that. There’s always something exciting about all of them, though,” Cary said.

Cole stated that she liked Mr. Cary’s involvement in school activities. “My favorite thing about Mr. Cary is his school spirit. He is at almost every school event, and is constantly supporting all groups and teams.”

Cary so far has been “a great principal who cares about the students and the teachers,” said Entrekin.

Horsman stated,“He’s very focused on making things better for the students and everything I have seen has been really positive. You can tell he’s got a heart for kids…He’s focused on the business of the school and the academics but really it comes down to is what’s in the best interest for the students.”