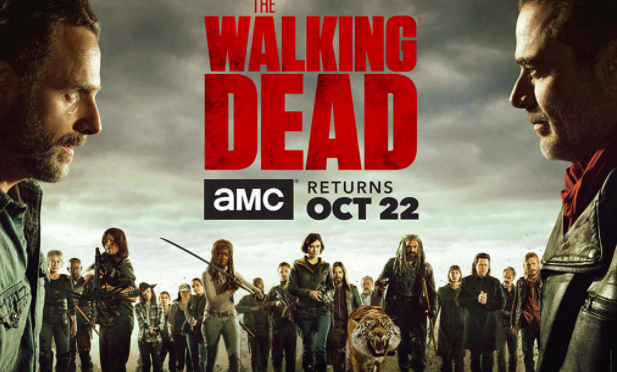 AMC’s The Walking Dead premiered with its first episode of season 8 on Oct. 22. This episode marked their 100th episode and there has been tons of hype. There have been many interviews with members of TWD’s cast, including NYC 2017’s Comic Con.

Austin Amelio (who plays Dwight) in an interview at Comic Con disclosed, “I think this is the most action packed season we have had. It’s going to be an insanely good season. The show is relentless, man.”

Last season we saw Rick being crushed under Negan’s power. Rick went from being a powerful leader to being under Negan’s thumb. Now this new season is all about Rick rising up and fighting Negan.

In question to this new season The Talking Dead host Chris Hardwick asked, “Is Rick back now?”

Andrew Lincoln (Rick Grimes) replied, “I’m going to unpackage pain. In fresh and unimaginable ways on the doorstep of Negan.”

We saw in last season that Carol withdrew from everyone, until she was told what was going on.

So in this upcoming season we will get to see her character develop to be an even stronger fighter and perhaps the relationship between her and Daryl ( played by Norman Reedus) will flourish.

“He’s the closest to her than I think any of them are,” McBride suspected in a recent episode of The Talking Dead.

With the death of Maggie’s (played by Lauren Cohan) husband Glenn (played by Steven Yeun) she was devastated. Leading up to this season she started to become vengeful and work her way into being a leader for Hilltop. In this season she has become the leader for Hilltop and we had one of the best scenes in this show. The scene was between her and Rick preparing for all out war. It had such a huge impact of emotion.

However with that said, of how much she has grown as a character, has anyone noticed how something else isn’t growing? Judith (Rick’s daughter played by over 16 actresses) is getting older and growing but pregnant Maggie’s stomach isn’t? Yet they reference in the first episode that she is in her second trimester? We aren’t sure if this will somehow connect to the story or not, but nevertheless Maggie is ready for this war.

In a review on rollingstone.com, “The Walking Dead Season 8: Everything You Need to Know,” writer Noel Murray commented, “Get ready for what could be a grueling ‘all out war’.” To review, the “all out war” is between Negan and Rick.

The first episode of this new season has us excited for what Rick will do next and if he will overpower Negan. I will tease a bit; Rick has completely changed. He has turned all this pain and shame into wrath against Negan. If you watch just the first episode you will understand.

It is very worth watching. Last season’s first episode was crazy and this season’s was not as off-the-wall but was so much better substance-wise. We get to see all these characters developing (ie. Rick, Carol, Maggie). I promised not to have any spoilers so you just have to see for yourself!