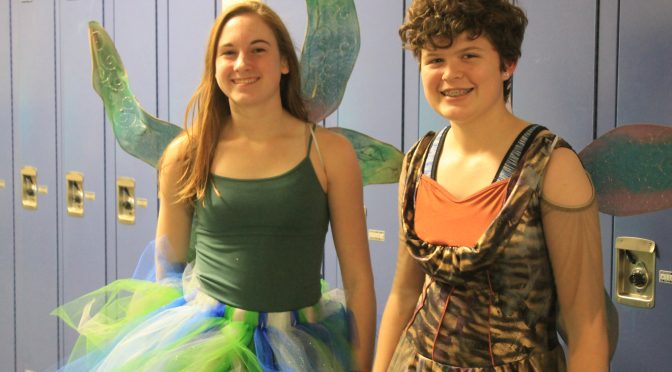 Greenfield Central’s Annual Shakespeare Monologue Competition took place on Jan. 29. Mrs. Schoeff’s Gifted and Talented Language class puts on this competition every year where competitors of all grades 9-12 perform a monologue in the hopes of making it to state.

The Gifted and Talented class does extensive research overall topics in the Elizabethan Era. They write a research paper, study the lifestyle, and get a sense of life at the time. The class works for 2 months to prepare for the final show. The night of the competition, the students have costumes that represent the people, food that represents their meals, and music and dancing that represent the entertainment of the Elizabethan Era. There is a setting for actors to perform in that represents a place you are likely to see at the time. There are also fairies who run around and tease the audience as they would do in Shakespeare’s plays.

Each section of the show is managed by one student; a student will manage the food, one for the instruments, one for the singing, and so on. The leader of the vocal groups Elysabeth Davenport, 9, said: “I feel that, because of the attention to detail that went into choosing music by composers of the era, that they accurately reflected the Elizabethan Era of England.”

All performers choose and rehearse a monologue to the best of their ability. They add character and feelings to their monologues. While performing, they attempt to represent the character and all they embodied in Shakespeare’s plays. These performers have as much as 1 month and as little as two weeks to prepare themselves for the night of the competition. Before they perform their monologue, they must give a brief explanation of the play up to the point of their speech.

Megan Ward, 12, was one of the nearly 20 performers that night. “I practiced my monologue a lot.  In front of the mirror, in the car, everywhere. I think people started to get annoyed.  But my hard work paid off,” said Ward.

Judges watch and take the emotion, character, and the play up to the point of the chosen monologue into account. They are judging on the performance and ability of the actors. The judges are the most important piece of this competition, for it is them who choose who advances.

The night goes through a series of events starting with an introduction of the time, some music while the audience chooses their seat and a trumpet interlude. The performances commence and after about an hour of different monologues from different plays and unique performances, the judges head off to choose the top 3 places.

During the time that the judges are gone, the food and beverages are served, singing and instrumental representations of the time are performed, and some dancing of the people is all a part of the show. Upon the return of the judges, everyone sits and a hush falls over the audience. The third and second place winners are announced. Finally, the first place winner is announced and awarded a medal.

This year’s winner was Megan Ward. The first place winner will proceed to state, where she will perform her monologue again and also add a memorized sonnet to the performance. Ward said, “Winning this competition is amazing. It was a great experience, and I love that I get to go to state, and hopefully represent Greenfield at Nationals!  The best part will be seeing other actors bringing feedback to next year’s competitors.”