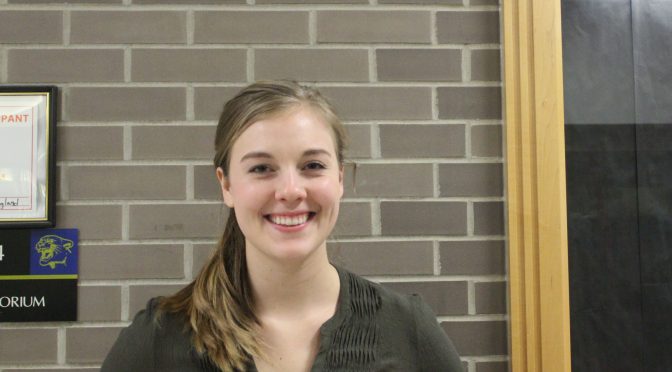 Students and teachers have been welcoming Ms. Carolyn Voigt,  the new theater and English teacher to GC. With plenty of previous experience and planning, she hopes to unite the theater program to bring  showstoppers to the GC auditorium.

After joining the theatre troupe at Greenfield-Central, Voigt loved the theatre community. “I loved the overwhelming sense of community that the department had to offer, especially since I was going through a tough time at that point in my life. Once I realized that the Theatre Education program was an option, I went for it!” She also stated that through the GC theatre program, she was able to audition for an All-State show at the Indiana State Thespian Festival, which led to the start of her work with Michael Deahn, Professor of Theatre Education at Ball State University.

Voigt’s passion for theatre is derived from the endless possibilities to keep teaching fresh and compelling. “We could discuss the history of theatre from Ancient Greece to the Italian Renaissance, or explore how costumes were drastically different depending on the time in history. We could design our own light shows or orchestrate sound clips for production. The possibilities are endless,” Voigt said.

As a new teacher, Voigt has her own goals for the theater program. “My overall goal is to really unite the theater department by establishing myself as a new presence in the department while also getting to know the kids.” She is eager for the Spring Musical entitled Once Upon a Mattress which will feature eccentric characters, witty humor, dancing, and catchy tunes.

Like their teacher, students are most excited for the spring musical because it is one of the most publicized events of the year. Students and teachers are looking forward to watching the theater program evolve and expand with the help of Ms. Voigt.