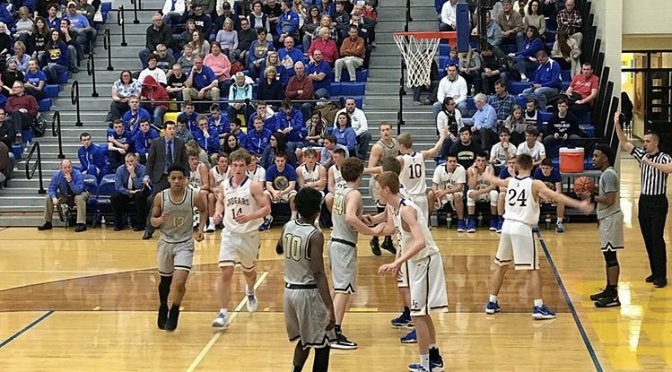 Photo Caption: Basketball cougars are on the defense

With only 5 games left in their season and an overall record score of 4-13-1, the boys basketball team and coach are practicing hard to end their season on a high note. With their main goal to make a run in and win sectionals- the team is practicing different drills and creating game plans to increase skill level and their chance of winning.

The boys basketball practices generally consist of breaking down a game plan, scrimmaging, as well as various shooting drills and free throws all led by coach, Lukas Haworth.

During a game, it all comes down to how the athletes play on the court, but behind that needs to be a close team featuring a tight bond. Brian Long, 12, states “The way we get to where we want to go as a team is by staying locked into what we’re doing, believing in ourselves and one another, as well as competing every time we take the floor.” Long also states he has a strong bond with everyone on his team and he has created friendships that will last a lifetime.

Matt Turner, 12, says “My team is family, being a senior, I feel like I know everyone on the team and are very close with them, including all the trainers and managers; we are all one big family and I love em all.”

Will O’Connor, 12, also has a special bond with his team, “We are all really good friends. Us 5 seniors have been playing together for a long time, we even hang outside of school. The team chemistry is really good and we are really close.”

Prior to a game, Turner prefers to keep to himself and to try not to do too much physical activity. Long likes to listen to music to block out noise and distractions. O’Connor, 12 likes to go over the game plan and focus on how they will play.

“The Mt. Vernon game has stuck in my mind because that was a four-overtime game. It was cool because I hit the pull up shot to send into over time.” O’Connor states and also mentions senior night, “Senior night was a lot of fun, we won by a lot and I got to play with my brother who is a freshman, it was really cool.”

With the end of the season approaching, the boys basketball team is practicing hard to ensure a win in sectionals and achieve that season-long goal.