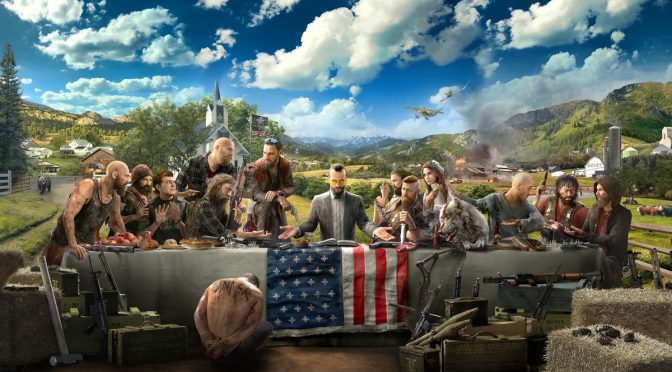 Far Cry 5 was one of the most anticipated games of this year and with good reason. Set in current day Montana, in a fictional “Hope County,” a cultist group has taken over. With the main antagonist being named Joseph Seed and the Protagonist being unnamed, it makes for an interesting story.

When you first load into the game it will ask you to create a character which no Far Cry game has ever done. I felt like there were very minimal options compared to a create-a-character system from Fallout but that is me being picky. Once you have created a character, you will be thrown into the story, where you are in a helicopter talking about how you are going to arrest the cult leader. One of your companions is talking about how you should just go back and get the National Guard involved but that does not occur. After a walk through their camp with creepy cultists staring at you, you enter Joseph Seed’s church. When you go in, he accepts getting arrested and says if God wants him to be free he will help him. At this point the cultists attack and you run away and begin your Far Cry adventure.

My experience with the beginning was just my constantly thinking about how awesome and amazing the graphics look and I still think it has some of the top graphics of some games competing with it right now. As for content, I have poured four days into the game and still have not come close to 100 percenting it. I did, however, beat the main story in 3 days, which was a product of my constantly playing it, so with casual playing, I would assume it would take about a week and a half or so. If you are looking for content this game has many side missions and collectibles to hunt for.

Far Cry 5 has a lot to offer and is definitely a pick up for any completionist or anyone trying to find a game that will last them a long amount of time.