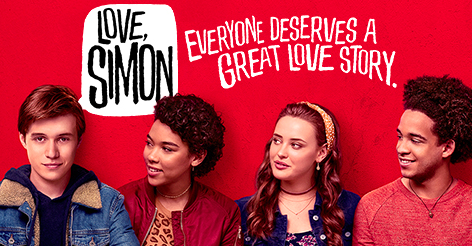 Brimming with emotion and amusement, Love, Simon portrays an emerging teen relationship. This movie is not just another high school musical; Love, Simon tells a different kind of tale.

Love, Simon features a teen who faces the challenges of coming out. The main character endures challenges and fears approval from his family and friends.  In the movie, a romance builds when Simon mingles with a peer through social media.

Eventually, Simon falls madly in love with this male teen whose identity is not revealed. In the course of time, the anonymous individual reveals his name as “Blue.” Although Simon and this classmate grow closer, the relationship remains hidden from those acquainted with Simon.

A character named Martin arrives in the film to provide some plot twists and turns. Drama club fanatic Martin is infatuated with Abby, who is one of Simon’s best friends. When Simon’s emails with Blue are found by Martin, Simon fears a social backlash. Martin agrees to not tell anyone, but forces Simon to accomplish a personal favor for him. Martin declares Simon has to help him impress the so-called hottest girl in school.

Dedicated to hiding his relationship and sexuality, Simon helps Martin and experiences mental chaos along the way. The complicated and unexpected journey of revealing Simon’s sexuality will leave viewers impressed.

Director Greg Berlanti demonstrates his exquisite skill with this well-organized film. Not only has Berlanti directed Love, Simon, but also Life as We Know It and the astounding TV series Political Animals as well. In addition, Berlanti proves his love for directing romantic comedies with The Broken Hearts Club and of course, Love, Simon.

Not only is Love, Simon educating, but a relatable movie to go see, with all the romantic drama. On another point, the soundtrack parades the movie with songs such as “Love Lies” by Khalid and Normani and “Never Fall in Love” by Jack Antonoff and MØ.

Actor Nick Robinson displays believable and cheesy skills by portraying an emotional teenage guy. Regardless, the film certainly shows everyone deserves a magnificent love story. In the end, Love, Simon is a heart-warming story.