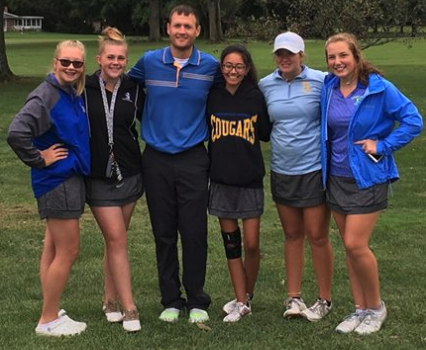 Photo: Tandess O’Neal, first on left, 10, pauses for a moment on the golf course with her team and Coach Russell Wily.

Even though it seems like she is best known for her golf, she also bowls. When asked about how dedicated she was to golf, Tandess replied, “When I first started this season, I was not really sure where my heart was with bowling and golf.  As the season went on, I realized I actually enjoyed golf. All of my golf friends opened up my eyes a little bit. I am pretty dedicated now.”

One of her golf goals is “to see where I am in two years (my senior season) and then I will really know what I want to do in college. Like I said, I am a bowler and that is my passion. But who knows, in two years I may want to golf in college.” And since she has had quite the season, playing the number five spot on the team all year, these goals seem pretty realistic.

Not only is she a team player on the green, but she is also a “supportive and great friend,” as described by Caroline Gibson, her friend for almost four years. Gibson said that her favorite thing about her is “her personality how she is always there is listen to me if I needed to tell her something.” Haley Hoagland, a friend of Tandess’s for almost ten years, described her as “always willing to help anyone who needs it.” Hoagland said her favorite thing about O’Neal is her commitment to bowling. One common thing that both Hoagland and Gibson brought up is that she seems to always be golfing or bowling.

According to O’Neal, “Golf is an important part of my life. I have met my best friends in golf. Haley Hoagland and Caroline Gibson have been a couple of my best friends since 7th grade. That is when we started golfing together, and I am so glad they talked me into playing this year. I have also made a lot of friends outside of the Greenfield team.”